The wait for the much-anticipated debut LP by Scottish rock band Cold Years has finally ended. Paradise, the first LP following a string of EP’s, was unleashed into the world on September 4th. The energetic and formidable offering from the band will, much like the bloke on the album cover, set your hair aflame (probably just figuratively). Below is a breakdown of each song with the best lyrics highlighted. 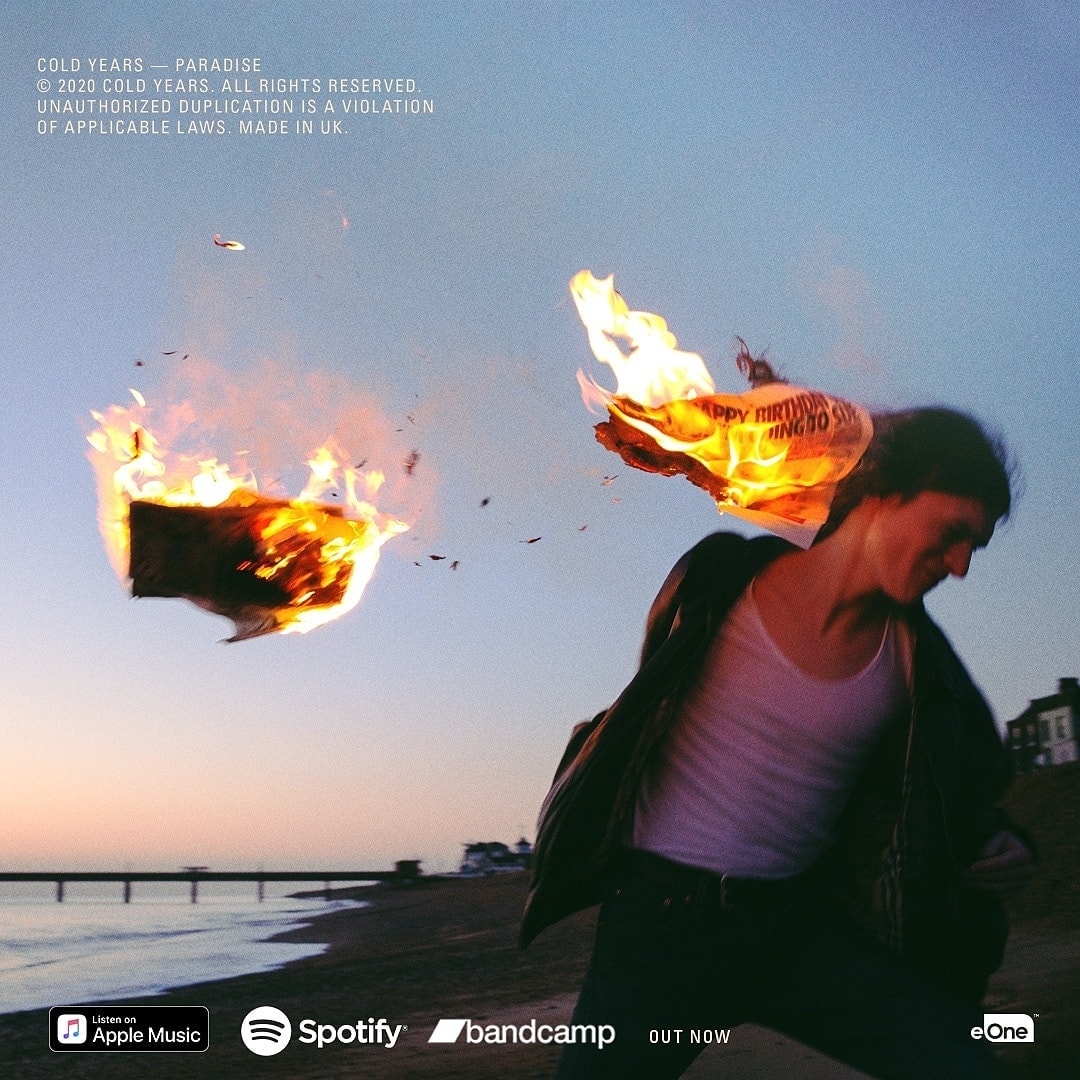 31 The lead song sets the stage for the rest of the album. ’31’ is the only choice for introducing fans to Paradise. After a sixty-five second acoustic intro, the song absolutely explodes into an onslaught of guitars and drums all while somehow remaining melodic. My first thought after I regained my senses (seriously, the song will make you lose yourself in the frenetic power of the music) was that I cannot wait to hear this song live. It is a great three-minute rock song.
Best lyric: “I don’t wanna be alone anymore / So many years I scraped myself off the floor / politicians, televisions, bad decisions, all the visions, inhibitions, I say fuck it all”

Life with a View Up-tempo and upbeat, ‘Life with a View’ is a song about living life to the fullest, making mistakes, and chasing the dream. It’s about shaking off the stagnation and comfortability that can set in and experiencing the world. In a stream of consciousness, Gordon lists all the ways to live life with a view – making mistakes, burning both ends of the candle, fighting the good fight, hanging the photographs on the walls, run straight into the sunset. All lyrics come back to one theme: making the choice to have an experience. Backed by a driving rhythm and Gordon’s signature growl, ‘Life with a View’ is one the standouts of the record and the most recent single.
Best lyric: “Fight the good fight, drink the good booze / Take the photographs and hang them on the walls / And death keeps calling but I keep missing all his calls.”

Night Like This The debut single from Paradise, ‘Night Like This’ is the triumphant announcement of the arrival of the band – and the culmination of years of the grit and grind it takes to make it. The single and accompanying music video give the feeling of a victory lap for all the hard work that is paying off and should rightfully be celebrated. ‘Night Like This,’ in a universal practice of commemorating the “wins” in life, is bursting with the youthful joy of a night out with friends celebrating a milestone.
Best lyric: “I’ve been on the floor, I’ve been on my face and I skinned my knees / I’m puttin’ faith in my self worth, I hope you realize / In what I can give and just what I want, I’m tired of tryin’ to hide”

Northern Blues Ever so slightly lighter than the first three songs on the album, but still staying true to the pulsating-rhythm-accompanied-with-a-melodic-chorus that is Cold Years, ‘Northern Blues’ is another single-worthy offering. Lyrically, it is ultimately about the hope of change and the hope of leaving. Gordon is masterfully ambiguous with his choice of words in describing what is being left behind. Is it about leaving a dysfunctional relationship? Is it about escaping the bleakness of a hometown that you have outgrown? Both? Depending on the listener, ‘Northern Blues’ connects on many different levels for many different situations.
Best lyric: “I got so bored I watched the paint dry on the windows of my mistakes / And I was so sure, never gonna make it out alive and there was no escape.”

Breathe Song #5 on Paradise is about letting go of the things that limit you and becoming the person you are meant to be. In one of the shorter songs on the album, ‘Breathe’ is musically matched to its lyrical content – a blitz of a song that breaks out and demands the listener’s attention. It is also the first of only three songs on the album written solely by Gordon.
Best lyric: ” I watched the sun set alone / For the final time I stand up against the waves where I used to ache / I stepped out of the rain / Heart was caged in ice, and now it burns / Now I burn in the summer.”

The Waits Slower and with a mellower tempo, ‘The Waits’ is about lost love and the memories of that person leaving. The song eventually swells into a steady hammering of drums and guitar with repeating lyrics of “With a bag slung over your shoulder / Yeah we’ve been here before.” It is no doubt a departure from the songs it follows, with Gordon bypassing the hopefulness present in the beginning of the album while laying bare the pain of watching someone you love leave. ‘The Waits’ shows the versatility of Cold Years.
Best lyric: “And that moment I felt when it came / As the smoke cleared out and you didn’t feel the same / I watched as you walked straight out that door.”

Burn the House Down As if to remind listeners of their power, the band follows the tenderness of ‘The Waits’ with the blistering onslaught of ‘Burn the House Down.’ Musically, the song feels like it could go off the tracks at any moment – a runaway attack that is matched by the anger of the lyrics. A commentary on society, Gordon sings of the anger of feeling that our generation has not had the same opportunities for ease of success as previous generations. One of the first songs from the band that takes aim at a society that needs a transformation, ‘Burn the House Down’ further displays a new dimension to Cold Years and why they stand above their peers.
Best lyric: “I’m sick of feeling like we’ve been left out in the rain / Our generations’ dealing with the pain of being short changed.”

Electricity A straight-forward rock song, ‘Electricity’ is another single from Paradise. In typical Cold Years fashion, the song is a catchy combination of lyrics that dare you not to sing a long and is backed by the drums and guitars working in unison to drive the song. The song is given an extra edge from Gordon singing in a lower register in different sections of the song.
Best lyric: “I feel electric and there’s a current in my veins / It cuts in an out like the reasons I don’t wanna behave / Yeah she’s connected and there’s a spark in the night / Once I lit a match and now the fire it burns in the daylight.”

Too Far Gone In an album full of songs that are single worthy, ‘Too Far Gone’ is yet another one. Radio friendly with an edge, the song explores the frustrations of wanting to change but never quite being able to break habits to do so. The high point and depth of the song kicks in at the 1:20 mark when the tempo changes and Gordon sings with an added level of aggression.
Best lyric: “Turn on the TV, and nothing but hate / I don’t start drinking until after 8 / Lonely nights are lonely when you’re face down in regret.”

Hold On ‘Hold On’ is one of the more personal songs on the album. It is a peek into Cold Years’ complicated feelings about their hometown of Aberdeen. Known for being grey and rainy for much of the year, it is not a coincidence that one of the themes prevalent throughout the album is the desire to get out, to leave. ‘Hold On’ is one of the most direct acknowledgements of this theme, and the lyric below provides great imagery to bring it to life in the listener’s mind.
Best lyric: “Keys in the ignition / The rain it always drives / Broken Ferris wheel against a greyed out sky / I’m always trying to leave.”

Dropout ‘Dropout’ revisits the commentary touched on in ‘Burn the House Down.’ It explores the helpless feeling of being put behind the proverbial eight ball by outside forces. Cold Years does not shy away from directly taking aim at this feeling and the reasons behind it:
Best lyric: What’s left to look forward to these days? / Yeah they don’t represent me or my friends or the things we say / And I’m sick of all the lying and the paths they took / They took all your money and they never looked / Back – as they drove away.”

62 (My Generation’s Falling Apart) If ‘Burn the House Down’ and ‘Dropout’ are commentaries suggesting that a generation feels that the deck is stacked against them, ’62’ is a screaming, blistering anthem that leaves no room for confusing that sentiment. With lyrics like “And everything our parents built burns up and falls down” and “…we were torn apart at the seams, all for a wasted pipe dream,” Cold Years attacks, lyrically and musically, the generational differences in opportunities afforded to young people.
Best lyric: “And we were born without a chance, the fuse is blown, SOS / My generation is falling apart / And we sold our every dream, for fake security / My generation has lost its heart.”

Hunter By far the most stylistically and lyrically different song on the album, ‘Hunter’ is a touching personal tribute to man’s best friend, a dog named Hunter. The song is simply an acoustic guitar and Gordon’s vocals, which accentuates the pain behind the memories he sings about. Listeners, especially dog owners, will relate to and feel every word of the song. This surprising album ending song once again shows the versatility of Cold Years.
Best lyric: When you were young yeah you chewed things, and it made me laugh / And all I did for you, I hope was right / You were part of mine, I was your whole life.”

Paradise on its own is an exciting listen and one of the standout albums of the year. What makes it even more exciting is that this is the first proper album by the band. Vocalist Ross Gordon, guitarist Finlay Urquhart, bassist Louis Craighead, and drummer Fraser Allan produce a sound that is unlike your run-of-the-mill bands and it is obvious after one spin of the record that they have the elusive “it” factor. Cold Years is at the beginning of its journey, and it seems to be a very bright and exhilarating road ahead. Do yourself a solid and buy the album. Cold Years may just make this year a little warmer for you.