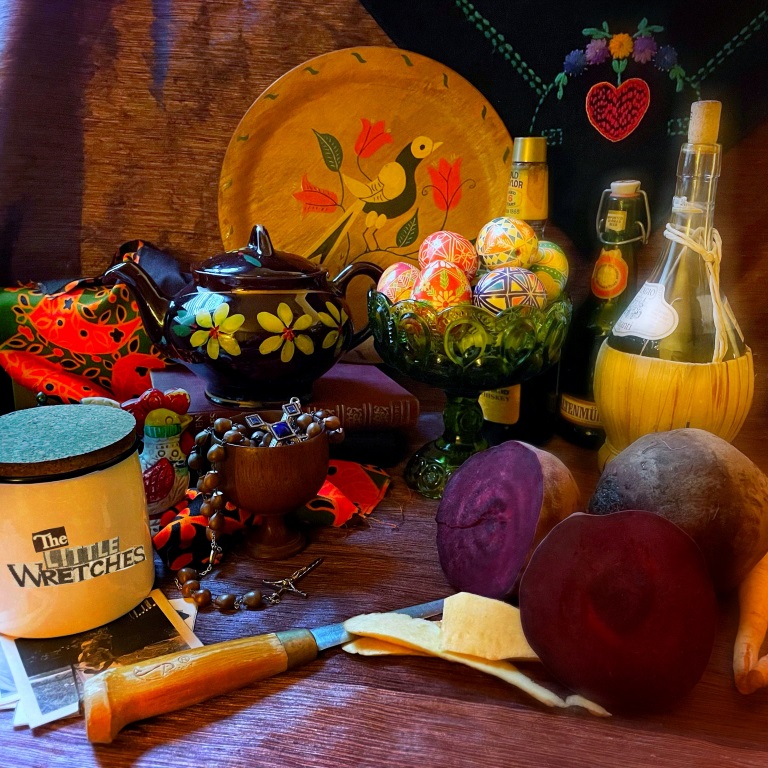 From the creative mind of Robert Wagner who brought has released the albums; Undesirables & Anarchists, Burning Lantern Dropped In the Straw, and Live at the Mattress Factory, with his band the Little Wretches has now released their much-anticipated follow-up Red Beets & Horseradish. This thirteen-track offering features some of Robert Wagner’s quite peculiar and poignant ideas and concepts set to music. With tracks like Tiger Pajamas, Palms & Crosses, and Heaven Was Open, audiences are abashed with colorful imagery and intriguing metaphors for life, politics, and religion. The album concept follows this religious theme, and the loss of God, with even the title being referenced by the religious symbolism, the horseradish being the memory of the bondage and suffering, while the beets symbolize the blood spilled around Easter and Passover. From the notes of the album; “The songs on the album involve vignettes and portraits of people who’ve suffered—old people, sick people, crazy people, people who are alone—but the heart of the songs lies not in the suffering of the characters but in the indomitable faith and humor that sustains them.” This theme is not only ever-present, it casts a lingering melancholy over some very clever and deeply interesting melodies. A bohemian offering for a modern audience.

The production on Red Beets & Horseradish is well-executed, always capturing that indie rock/folk sound. The Americana roots melodic structures play out to the crisp and clear upper frequencies and the bottom end derives a powerful funk that elicits a movement reaction in his audience. Listeners should pay special attention to track eight; It’s Raining as the guitar melodies coupled with the spoken word offers some deep and poignant prose which requires a deeper investigation that this review can provide. The slight use of vocal harmonies on this track, however, is one of my favorite use of this slight stylized use of harmony that most indie artists should take note of its effectiveness. Red Beets & Horseradish really does not serve well in the commercial radio world, as the thoughts and suggestions can lead to more conversation than radio would like to have, instead, this album should be consumed by audiences looking to have these deeper conversations, perhaps at speakeasies, poetry readings, fancy coffee houses, and those looking to interpret art for theatre. As an addition to Robert Wagner, and the Little Wretches catalog, Red Beets & Horseradish is the more commercially available album, as it speaks to a vast audience, and it presents itself in a lovely flow which is quite appealing. A very enjoyable album, but not for the uncomfortable feeling left behind, perhaps that is truly what art is about.