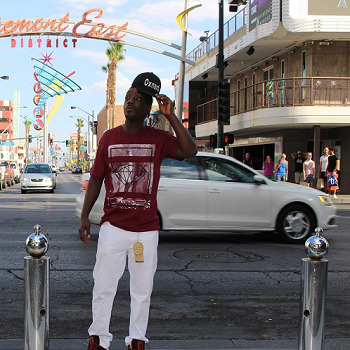 With over 35,000 views Eli Uno’s latest video “Cynical Rap,” released April 6th, 2018 from his upcoming album “The Polished Turd,” which drops on April 20th, 2018. The day of April 20th is better known as 4/20 which is International Marijuana Appreciation Day. Eli’s video within the first day received over 12,000 views. His first single “Blvd Nights,” on his upcoming album reached over 30,000 plays within 24 hours on SoundCloud.
Eli is based out of Las Vegas where the video was taken place. Eli takes you throughout his neighborhood whether is was driving or walking.  The viewer will receive a raw insight from the artists perspective of what cynical is like in his life. The tone of the video matches the authenticity of the lyrics delivered by Eli. If you are looking for a real rapper who gives back to his community Eli is the one to add on your playlist. Eli will be donating 100% mechanical royalties from “The Polished Turd,” to Charity Water. Charity Water is a well-known non-profit organization dedicated to providing clean and safe drinking water to developing countries.