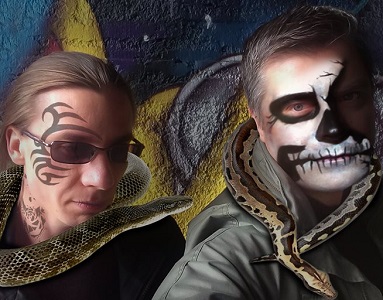 The Finnish pop/rock band, The Impersonators, was formed when the duo of Tommi Tikka and Antti Autio got together. They each have had a lot of success in the music industry prior to forming The Impersonators. The duo teamed up with the professional producer Janne Saksa to create the full sound they were looking for. This team has released the singles ‘You Are The One’, ‘Burning Blue’ and ‘Broken Snow’ in the past. Now, they’ve released the new track ‘Effigy’.
The single ‘Effigy’ was inspired from the spirit of Halloween, however the track stands on it’s own any time of year. Tommi says the main subject of the track is killing your ego, something we can all relate to. Once we can get passed our ego, our true self can come shining through. So, as you can see in the official music video below, they’ve built a literal effigy to ultimately find oneself. Maybe the spirit of this song can be an effigy for others out there to create a positive outcome.