I love doing interviews with independent artists. They are honest, they are real. You don’t get those PR friendly answers, or a list with things you’re not allowed to talk about. Yeah, I’ve done those too in my radio days.

I’ve been blessed so far with interviewing artists on my blog who kept it real! I can ask anything I want, I get honest answers back and we have a lot of fun in the process!

And even though I’ve been blessed so far, Laura of Tokyo Taboo took the whole thing a step further. Some of the answers Laura gave me had me cracking up so hard, it still hurts… God, I love interviewing independent artists, they are real to the bone!

Laura of Tokyo Taboo (TT): We’d love to…but we are broke from paying for our latest music video

Free copy of our EP and some merch instead?

TDG: Can you describe Tokyo Taboo in one sentence?

TT: We’re really good in bed and our tunes are pretty awesome too.

TDG: So you got no problem hitting those high notes huh?

TT: I can sing bloody high – dogs love it . Their ears prick up and everything

TDG: What are your roots?

TT: I’m English from all over and grew up singing along to The Sound Of Music with my Grandpa playing the organ. When I was five I got my first tape player and played Madonna’s “Like A Virgin” EP over and over to my barbie dolls. I think that’s when I knew I wanted to do music.

Mike’s polish. He moved to London six years ago and he is a musical genius – started playing the accordion when he was four or five, plays piano guitar etc.

TDG: How long have you been working on your new EP?

TT: Well it took us a few months to write, two weeks to record in LA (two weeks of sixteen hour days) and four months for Adam (our producer) to put all the parts together. Then we got it mastered in London which took a few days. A lot of work involved!

TDG: What’s involved in your songwriting process? Who does what?

TT: I write the lyrics and melody generally try to come up with an idea for the song. Mike does more of the arrangement and music writing but he’s getting more and more involved in helping with lyrics and melody, which is good as then I push myself a bit and try and think of alternative lyric/melody ideas rather than going for my first idea. We argue a lot when writing because I’m really impatient and hate being told what to do!

TDG: Which aspect do you enjoy the most while working on new material?

TT: I love recording – but get bored when it’s not vocals related (I blame a low attention span) I particuarly like it when I improvise a melody or do something that sounds great! Then I’m like “Wow I just impressed myself. I couldn’t do that a month ago…’ It makes me feel like I am progressing, learning & getting better. I also love coming up with visuals: photo shoots around the new material, music videos etc. We’re planning a new outlandish music video at the moment which will be CRAZY!

TDG: New outlandish music video? For which track? Can you tell us more about it?

TT: We were really inspired by the two latest Bowie videos – so wanna go for something surreal that gets people talking.. That’s all we can say right now!

TDG: How would you describe the sound of your new EP?

TT: Well, it’s hard to describe the EP as a whole as all the tracks are different. “Naked” – poppy, catchy radio friendly “hit song’ – ya know really commercial, up beat, pumping energy. “He Hit Me” is a little darker, moodier with a real industrial sound. “Then Sugar Lies” has more of a “band’ feel – more live sound, but still lots of hooks!

So very poppy, all upbeat from beginning to end – but with some interesting topics in there. We’re not a “Dancing in club/ Rubbing the girl I love’ cliche band but we are always upbeat & high energy

TDG: Who or what inspires you?

TT: Being in LA was really inspiring – the heat, the stinky streets, the hobos, the beaches, the mountains. It’s a great place. Much better than London. Get us a green card and we’d move there in a second!

TDG: Wait till you see Hollywood, The Walk Of Fame, Disney Land

TT: We want to go to Japan next – Tokyo of course!

TDG: How important is connecting with fans for you? What kind of connection do you have or like to have with them? 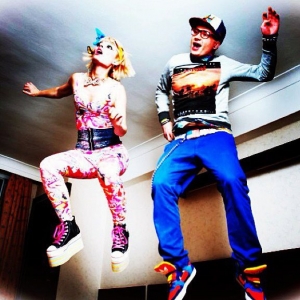 TT: Very important! We want people to hear our music & love it and to get fans who tweet us nice things is really great. Even a retweet makes us feel good! When you’re slogging you’re guts out if one person appreciates what you’re doing it means the world and makes you push on

TDG: And social media is a big help with connecting with your fans?

TDG: You gotta pay Facebook for connecting with people? How does that work and how does it affect your connection with fans? ’cause a lot of people are on Facebook, like it or not…

TT: YES if you’re a business you have to pay to be visible to people on there. I have my personal page too that I promote band stuff on but then it’s swamped with people I don’t know. I guess FB is a little oversaturated these days!

TDG: What’s the biggest misconception people have about you and/or Tokyo Taboo?

TT: Hmmm….tough question. I guess in general people are surprised by how rockin we are live. We rock out, roll around, swear, sweat etc. Our recorded sound is really mainstream and sugary whereas live we are more rock n roll. We put on a real show. I always hate to see bands who just stand there scratching their asses pretending to be “cool.’ I guess in general with music people think it’s much easier than it actually is to become successful. Seriously, this is like the hardest thing I’ve ever done – and that’s precisely why I’m doing it.

TDG: I love artists/bands who are going all out on stage, but aren’t you afraid you “scare’ the fans, who are used to your recorded sound?

TT: Na! I think that’s our selling point as we stand out live. I think (hope!) people like us more because of our live energy and onstage antics!

TDG: Who’s currently on repeat on your iPod?

We have a playlist dedicated to Max Martin too (major pop producer) amazing listening to his song structures as he’s such a huge hit song writer – we listen to him to learn his tricks!

TDG: Which track/album should never have been released, own or somebody else’s and why?

TT: I don’t regret any music we’ve made & put out as it’s about development and we have definitely moved really far forward. It’s good to look back and see how far we’ve come! And I think even the worst song in the world has something to offer (teach us what not to do maybe?)

TDG: What’s the best piece of advice you ever got when you started out and you think it would help other aspiring artists/bands?

TT: “The music business is a cruel and shallow money trench, a long plastic hallway where thieves and pimps run free, and good men die like dogs. There’s also a negative side.“

I read this on a production company’s site that we worked with in 2011. Ironically they were really rubbish and full of false promises. They put in 0% effort and made a lot of money tax free. So I think that just goes to show you how hard the music industry is. (Even those pretending to be honest and up front are not really when it comes to money and getting the studio booked out..)

I guess my advice then would be – don’t trust anyone, don’t pay in cash, always get everything in writing (a contract preferably) don’t get upset by people’s opinion – thick skin needed & listen to other people but take their advice with a pinch of salt…

TDG: You just dropped your EP and you gonna shoot a new music video. What more do you have in store for us?

TT: Lots more! Putting together a business plan atm so lots of sparkling new ideas. We are going develop our own fashion line & E Store (jewlery / head scarfs / t shirts…not finalised yet) and maybe do a house tour in the States (play at random people’s homes for kicks!)

TT: Yes definitely! Though you’re not allergic to latex are you – we like a bit of latex!

TDG: Before we wrap this up, got any last words of priceless wisdom you wanna lay down on us?

TT: Everybody get naked! It’s out NOW on iTunes. Buy a copy & tweet us what you think!