With Mila Falls, it was a little bit different. Months ago, someone on Twitter told me I should follow her, check her out. And where the artist’s music usually grabs my attention, it was the profile picture of Mila that did it for me. Because besides the music, the artists also need to have a sparkling personality in my personal and humble opinion. And Mila’s profile pic was oozing just that, personality!

With Mila teasing her upcoming single release lately, it was time to get to know the lady behind the hair bows. So, we grabbed a cup a joe, sat down and had a little chat: 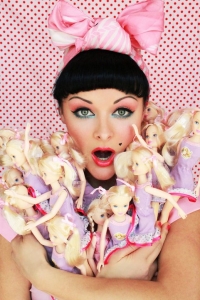 TDG: The thing I always ask myself when you post a new pic of yourself, what’s up with you and those Minnie Mouse-like hair bows?

MF: Haha, well I love scarves and hats and wigs and head pieces, ain’t nothing more to it… I don’t have a weird tattoo on my head that I’m hiding or nothing.

TDG: How would you describe yourself in one sentence?

MF: I’m colourful inside and out with a love for all that sparkles.

TDG: You’re currently working on your debut album and not one, but two music videos! When are you gonna drop those on us?

MF: Oooo well the first video is coming later this week (hold on to your seats)… My debut album will follow after, we are currently sorting out the boring business bits! I just wanna tour the world already!!

TDG: How did the album come together? What involved in your songwriting process?

MF: The album is going to be MAGIC! I wrote every track and each one is hand picked from a big bunch of tracks. I musta written about 30 songs that could have made it. The album takes you on journey through POP, from dance floor hits to pop-stompers. 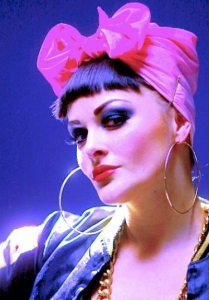 The producers I’ve worked with on the project have previously worked alongside some pop legends including Britney Spears and Outkast! AMAZING! I’m still working on an album title tho, but off the record, it could have something to do with Barbie Dolls & Headscarves…

TDG: Which aspect do/did you enjoy most while recording, either the album or music videos?

MF: I love it all (CHEEEEESY ANSWER!)… BUT one thing is for sure, filming the video for “Party In The Stars” was one of the most fun four days of my life!… I had a 40–man crew working with me, it was an epic shoot for a first video.
One of the most amazing things was the custom built 80′s inspired spaceship and giant moon set. Also, the camera crew had just finished James Bond’s Skyfall, so the team were SERIOUSLY good! My motto is if you’re gonna do something, then DO IT WELL. So thats what we did!

TDG: I gotta see this! Did you come up with the idea of the music video yourself?

MF: The director Tobias Marshall and I came up with the concept, it’s inspired by Red Dwarf, Kool Keith and Button Moon. We then had a super amazing team of cameramen, make up artists, costume and set designers, make the ideas reality. It was BRILLIANT! It’s SUPER SPACEY! It’s like a mini film!

TDG: Who or what inspires you creatively?

MF: I love driven people, I like people that go that extra mile and aren’t obsessed with getting paid. It gets boring if people only want to work creatively if the money is right. If you’re talented the money will find its way into your bank account or your pocket!

Oooo and COFFEE keeps me going! Hmmmm I want one now! Can coffee be an inspiration?

TDG: So I take it you like to get paid in Starbucks Giftcards then?

TDG: What is the biggest misconception people have about you?

MF: Erm the thing that people LOVE to do is squeeze you into boxes. Who are you like? Who do you look like? Some of the comparisons are a bit obvious and unimaginative… Bla de bla bla… BUT I guess I’m always doing it about other people so I can’t really complain. 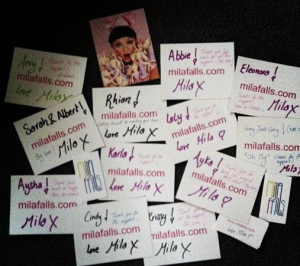 TDG: How important is connecting with fans for you? What kind of connection do you have or do you like to have with them?

MF: Without fans you have nothing. My fans are INCREDIBLE, they draw pictures of me, make me collages, send me presents and show lots of love on Twitter and Facebook etc. I love sending signed cards out around the world and I run competitions like #winamilafallsnecklace to show some Mila Falls love back.

TDG: Can I have one too?

MF: You mean you want a girls necklace??? Or just a signed card?

TDG: Are you daring me to wear one? I got no shame ya know!

MF: HELL YEA, I think everyone should wear a Mila Falls necklace!

TDG: What’s the craziest thing a fan every did, made or said to you?

MF: Tattoos of my song titles, a ‘100 reasons why I love Mila Falls’ book, leaving a present under the wheel of my car, covering my songs on Youtube…

TDG: Who’s currently on repeat on your iPod?

MF: Ooooo ermmm, Rudimental are niiiice, my mate Thom Jules is singing with them on tour at the moment. I must catch them live soon.

TDG: What’s the best piece of advice you ever got when you started out and you think it would help other aspiring artists/bands?

MF: Be patient and work hard, even when you can’t be bothered! It’s those times that make the difference. In my opinion, the music industry is a bit like a game of snakes and ladders, you climb up all the ladders then BOOOOOM you slide back down a scary snake! You really have to be competitive and enjoy playing the game or just get out!

TDG: Which single or album should never ever have been released (own or someone else’s)? 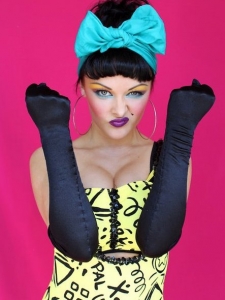 MF: In the words of Jerry Springer, “Take care of yourself, and each other”